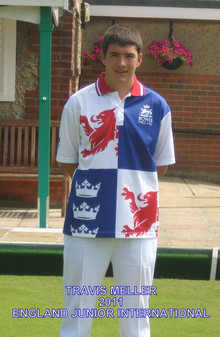 Travis was introduced to Bowls by his late Grandfather Peter Parsons, a former member of the IWIBC & Cowes BC, when he provided him with a set of carpet bowls at the grand age of 2. It was clear from the outset that Travis had a unique natural ability which his subsequent achievements have borne out. He has always been unpredictable and his desire to entertain has at times been misconstrued as being disrespectful, however, he has progressed through the young volatile period to mature into a highly respected and popular player.

Indoors, Travis first reached the Qtr-Final of the IWIBC Mens Singles when 9 years of age and 4 years later, at 13, won the title as well as the Triples & Fours. In the same season he was the National Top Junior in the English Bowls Youth Development Scheme. He first represented the club in the Denny Cup in the 2006/07 season. In this season, aged 11, he also entered his first National Competition, the U25’s & having won the Area reached the last 16 at the Finals in Nottingham, defeating England International David Roe in the process.

In the 2009/10 season 14 year old Travis was also invited to join Victory IBC of Portsmouth, from where he played the National Competitions and in this season, with partner Darren Griffith, skipped to the Area Final of the Pairs as well as winning the Area Final of the Champion of Champions, representing the IWIBC.

The 2010/11 season proved to be his most successful to date. He entered 5 Nationals, reaching the Area Final in 4 & winning 3. In the Pairs, again with Darren, he skipped to the National Semi-Final as well as skipping the Fours to the last 16 at Nottingham.

On the domestic front at Victory IBC, he became the Mens Singles & U25 Champion. In the Hampshire Mens Singles he was defeated 21-20 in the Semi-Finals. He was also successful in the Pairs, Triples & Fours at the IWIBC.

Whilst at Victory, apart from playing Denny Cup he also represented Hampshire in the Liberty Trophy & skipped for the U25’s.

In the 2011/12 season he will be playing his Nationals once again out of the IOWIBC and has been selected for an England Mixed U18’s international team.

Outdoors he first became the IOW U11 Champion at 7 years of age, the U18’s at 11, U25’s at 12 and then in the 2010 season, the IOW Mens Singles Champion at 14. In this year he was also part of the IOW U25 Double Rink Team  reached the National Final. He has so far appeared at the Mecca of Bowls,Worthing, on 8 occasions.

Travis has played Middleton Cup since 2007 and this season successfully skipped in not only this but also the Balcomb Trophy and U25 County Double Rink.

He has been a member of the Shanklin ‘A’ Team since 2008 and for the past two seasons, their Vice Captain. This season he skipped in the Club Two Fours Team that reached the last 16 nationally.

In 2011 he became an England Junior International.

In 2013 Travis was the runner-up in the National Champion of Champions competition, which  earned him a place in England's top 20 best players.

This season, 2013/14, Travis has skipped in the Denny Plate, a national competition in which the team were finalists at Northampton in March. He  also reached two national quarter finals with members from our indoor club.